Freemasonry Among the Five Tribes

Oklahoma is a Choctaw word meaning “red people.” The name was first proposed by Choctaw Principal Chief Allen Wright during treaty negotiations with the federal government in 1866.[i] Wright’s suggestion was employed by the Brethren of Oklahoma Lodge No. 217 when that Lodge was chartered in 1868.[ii] The region that became Oklahoma was originally home to the Caddo, Osage, and Wichita Nations. Cherokees who had voluntarily migrated to Arkansas in 1812, would periodically cross into Osage country, leading to an ongoing feud between the two tribes. This caused Col. Matthew Arbuckle to move elements of the 7th US Infantry Regiment west from Fort Smith in 1824 to establish a post at the confluence of the Grand and Arkansas Rivers, in order to maintain peace on the frontier.[iii] The establishment of Fort Gibson by Arbuckle, a Freemason, ushered in the arrival of Freemasonry in the region.[iv] 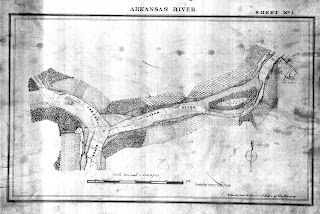 Early map of the Arkansas River, illustrating the location of Fort Gibson
(Courtesy of the Oklahoma Historical Society)

While some Choctaw and Chickasaw hunting parties regularly came to what would become the Indian Territory in pursuit of buffalo, the first full scale emigration of the Five Tribes occurred in 1827 when roughly 700 Creeks led by Chilly McIntosh made their way west in the wake of the Treaty of Indian Springs. Known as the McIntosh Party for their support of Chief William McIntosh in his ceding of Creek lands for land west of the Mississippi, these Creeks settled in the Three Forks area near Fort Gibson.[v] The Western or Old Settler Cherokees were removed from Arkansas the following year.[vi] It is estimated that the Indian Removal Act of 1830 would see over 58,000 members of the Five Tribes either emigrate or be forcibly removed to the Indian Territory.

The Five Tribes were, as they remain today, sovereign nations. This required the United States to enter into treaties with the Five Tribes, which often made travel to Washington, DC, necessary for tribal headmen. For the mixed bloods that dominated tribal politics, this interaction with white culture was not foreign. The Cherokee William P. Ross, the Choctaw Peter Pitchlynn, and the Creek Chilly McIntosh were all of Scottish descent. It was on a diplomatic visit to Washington, DC, that William P. Ross was made a Freemason at Federal Lodge No. 1 in 1848.[vii] Pitchlynn would also become a Freemason in Washington, DC, and both he and Ross became Royal Arch Masons there.[viii]

The 1839 Act of Union brought together the Western Cherokees, formerly of Arkansas, and the recently removed Cherokees as the Cherokee Nation, establishing their capital at Tahlequah.[ix] It was here on November 9, 1848, that Cherokee Lodge No. 21 was chartered by the Grand Lodge of Arkansas. The first Lodge Secretary was William P. Ross. Additional Lodges, with primarily indigenous membership, that were chartered included Choctaw Lodge No. 52, Flint Lodge No. 74, and Muscogee Lodge No. 93.[x] Also among the membership of these Lodges were other important Brethren, Christian Missionaries. The Methodist Thomas Bertholf held membership at Cherokee Lodge.[xi] At Muscogee Lodge was the Baptist H.F. Buckner.[xii] These men became acquainted with another Baptist missionary, and soon to be Brother, named Joseph S. Murrow. 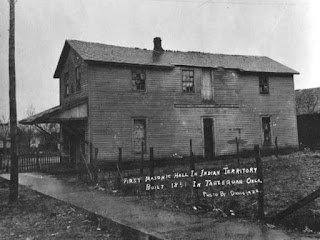 The first meeting hall of Cherokee Lodge No. 21
(Courtesy of the McAlester Scottish Rite)

Some have contended that the men of the Five Tribes found something similar in Freemasonry that they had experienced elsewhere. There is reference to a Choctaw “Horse Masonry” with signs and grips. Edmond H. Doyle, an early Masonic luminary in the Indian Territory, often told a story of meeting a non-English speaking Choctaw in 1876 in the dark of night. Doyle, seeking shelter from a storm, gave a sign which the Choctaw recognized and greeted Doyle with hospitality.[xiii] Others have referenced a fraternity of “Indian Blood Brothers” with a stone altar bearing the Square and Compasses as a familiar sight to Native Americans, bringing them to Freemasonry.[xiv] However, what many men of the Five Tribes saw in Freemasonry was a connection that could help preserve their Tribal existence. Conversions to Christianity were common among the Five Tribes in the 19th century. Chilly McIntosh, of the Creek Nation, was ordained as a Baptist minister by the Rev. H.F. Buckner, a Freemason, in 1848.[xv] Chilly’s half-brother Daniel N. McIntosh, a member of Muscogee Lodge, also became a Baptist minister.[xvi] The men who were either responsible for providing for the needs of the Five Tribes, or who could provide legislative influence, were often Freemasons. For the Five Tribes, it was the Masonic Lodge that could be turned to for schools, churches, relief agencies, and post offices.[xvii]

The Civil War would interrupt Freemasonry in the Indian Territory and it was particularly devastating to the region. The War did bring two notable men to the Indian Territory. In March of 1861, Albert Pike was appointed commissioner to the Indian Territory by the Confederacy for the purpose of negotiating an alliance with the Five Tribes.[xviii] Pike had become a Freemason in Western Lodge No. 2 of Little Rock, Arkansas, in 1850. He was elected Sovereign Grand Commander of the Scottish Rite in 1859.[xix] Pike, having represented the Creek, Chickasaw, and Choctaw Nations in legal claims against the federal government, would personally make the Choctaw Peter Pitchlynn a 32nd Degree Mason in 1860.[xx] By 1862, Pike had been commissioned a Brigadier General, making him the ranking Confederate officer in the Indian Territory.[xxi] His tenure as a combat general would be brief, resigning later in the year. Pike’s resignation was prompted by orders to move his Indian Brigade outside of the Indian Territory, which violated treaty stipulations, and due to the lack of material being provided his command.[xxii] Again, the men of the Five Tribes saw a Freemason who placed their well-being first and several of the signatories of the Confederate treaties that Pike negotiated held Masonic membership.

Also working to see to the needs of the Five Tribes at this time was Joseph S. Murrow. Murrow arrived in the Creek Nation in 1857 to assist the Rev. H.F. Buckner, a member of Muscogee Lodge. As the federal government withdrew from the Indian Territory in 1861, Murrow was appointed as Confederate agent to the Seminoles; he had organized a church in the Seminole Nation in 1859. As the situation grew worse in the Indian Territory during the Civil War, Murrow and his family took refuge in Texas.[xxiii] It was in Texas that he became a Freemason in Andrew Jackson Lodge No. 88 in 1866.[xxiv] Murrow returned to the Indian Territory in 1868, establishing another church at Boggy Depot.[xxv] It was at Boggy Depot that Freemasonry sprang to life again in the Indian Territory with the establishment of Oklahoma Lodge No. 217 that same year. Murrow would go on to be a charter member of the first of numerous Masonic orders in the Indian Territory, including Indian Chapter No. 1 of Royal Arch Masons at McAlester, Oklahoma Council No. 1 of Royal and Select Masters at Atoka, and Muskogee Commandery No. 1 of Knights Templar. Murrow’s continued dedication to the welfare of the Five Tribes culminated in his co-founding of Indian University, now Bacone College, in 1880 and his establishment of the Murrow Indian Orphans Home.[xxvi] The men of the Five Tribes could find no better example to emulate than that of Freemason Joseph S. Murrow. 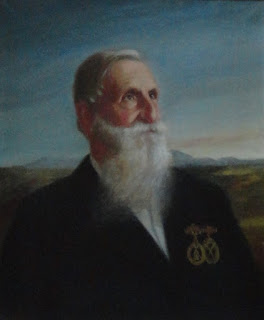 Joseph S. Murrow
(An oil portrait from the collections of the McAlester Scottish Rite)

The Curator
T.S. Akers is the Curator of Collections for the McAlester Valley of the Ancient and Accepted Scottish Rite of Freemasonry.